We consider an organism equipped with sensors, and try to infer the notion of “physical space” from its sensorimotor dependencies while assuming no prior knowledge of the organism about the fact there exists any such thing as a surrounding physical space.

Basically, the approach is the following one: we put ourselves in the organism brain’s shoes, all we can do is:

and then we collect sensory inputs, which are twofold:

Here, proprioception encompasses locating his hands and body in space, and exteroception consists in visual inputs from its eyes and gustatory perception in his mouth. So the proprioceptive body in this case would be the information about the body the brain gets from proprioception only, i.e.: only its limbs location in space (not the visual/gustatory cues its gets from the environment via its eyes and mouth).

Then, to learn more about the physical space in which the organism is embedded, we focus on the exteroceptive sensors, since they are the ones that react the environmental changes. In particular, we pay close attention to compensable movements, that appear in situations like these:

These special compensable movements are exactly what stems from the notion of the physical space in the sensory inputs: in the previous example, it’s the notion of relative distance between the organism and the object in the surrounding world (hence a spatial property) that is the same in step 1 and step 2, and that causes the sensory input to be same.

with resort to dimension reduction methods. Indeed, it can be shown that:

How is the simulation of organism 1 conducted? 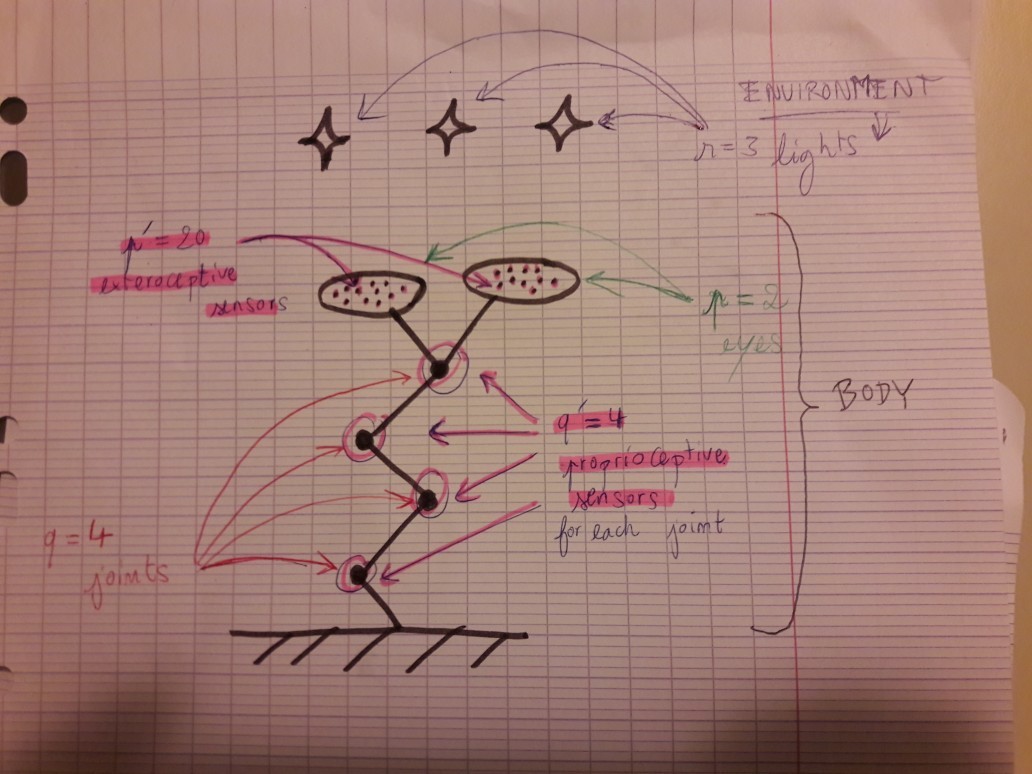 The situation is the following: organism 1 is an “arm with two eyes” comprised of:

and an environment constituted of 3 lights.

Now, the motor commands are the commands the “brain” of the organism sends to its body (e.g.: «Move the second joint a little bit!»).