Motor control ⟶ nothing is nominal, not only reaction time to take into account, also motor responses

driven by goals (different from reflex, which is not goal-directed), and they can reach these goals or fail to do so

Cognition is action: thinking as accompanied with a sequence of actions

Important aspect of actions: there is a content (ex: when you take your keys, you need to exert a force on them, which you can measure) ⟶ each action has:

Decision task: the agent has to say if a presented word is an English word or not a lexical word ⟶ experimentally, agents react faster when they see a known word than a non-word.

Task: the subject press a ball as strongly as possible. Meanwhile, stimuli are presented in a subliminal way:

Experiment: two species of monkeys have to choose between one banana close to them, or three bananas further away

«the least number of independent coordinates required to specify the position of the system elements without violating any geometrical constraints. » Saltzmann (1979)

Muscle redundancy: more muscles than necessary to exert a given force

Is redundancy a problem or a benefit? ⟶ in terms of motor coordination, it is good to have many solutions to solve a given task

There is noise at all stages of sensorimotor processing (sensory, cellular, synaptic, motor)

Standard deviation increases as the instructed force does ⟶ the higher the force, the more noise there is.

Signal-dependent noise: the noise increases with the signal level

« We live in the past »: we see/account for something, it has already happened ⟶ we need to take into account these delays

⟶ properties in external spaces that are invariant tto the body position

⟶ there invariant respresentations of writing for instance: you can write with your hands, foot, teeth, etc… ⇒ same shape

duration and velocity scale with amplitude and load

Commands sent even if the arm cannot move: you can measure that the command is the same irrespective of whether the arm is blocked or not (with EMG)

Structured variability: each you reproduce a movement, you perform a (slightly) different movement

Ex: the subject has to do movement, going through points ⟶ variability accumulates (standard deviation of the trajectories) at positions where it is not necessary to be precise, whereas it is made minimal at specific strategic points

Are motor invariant really invariants or simply by-products of control?

Motor variability is as important as motor invariants (structure of variability).

If you disturb the movement at some point, the controller can go back to the intended trajectory. Motor control is highly flexible in space and time.

Speed/accuracy trade-off: going back and forth over a $w$-wide target. $A$: amplitude of the movement. $MT$: movement time, $a, b$: constants

the smallest possible subset of system variables that can represent the entire state of the system at any given time.

Control theory: deals with the behavior of dynamical systems, and how their behavior can be modified by feedback.

the controller is an inverse model of the system

the controller is a function of an error signal

Direct (forward) model: predicts the behavior of the system (ex: when I move my arm, I can try to predict the displacement) ⟶ causal: from the control to the effect

Inverse model: for the desired effect to the control (ill-defined model: many possible solutions)

Use of a direct model (rather than external feedfback) to evaluate the effect of command and associated error ⟶ avoid delays in feedback loops (triggering instability).

Task-dynamics approach: you assume that the whole system is a dynamical one, often with attractors ⟶ you can compute the spatio-temporal trajectory (movements result from convergence toward attractors)

⇒ you have no control on time, it comes from the dynamics.

Adaptation of the behavior to the environment in an optimal way (e.g. spend as little energy as possible): to solve the redundancy problem

Extension of the internal model approach:

From movement to action

Gives value to the states: 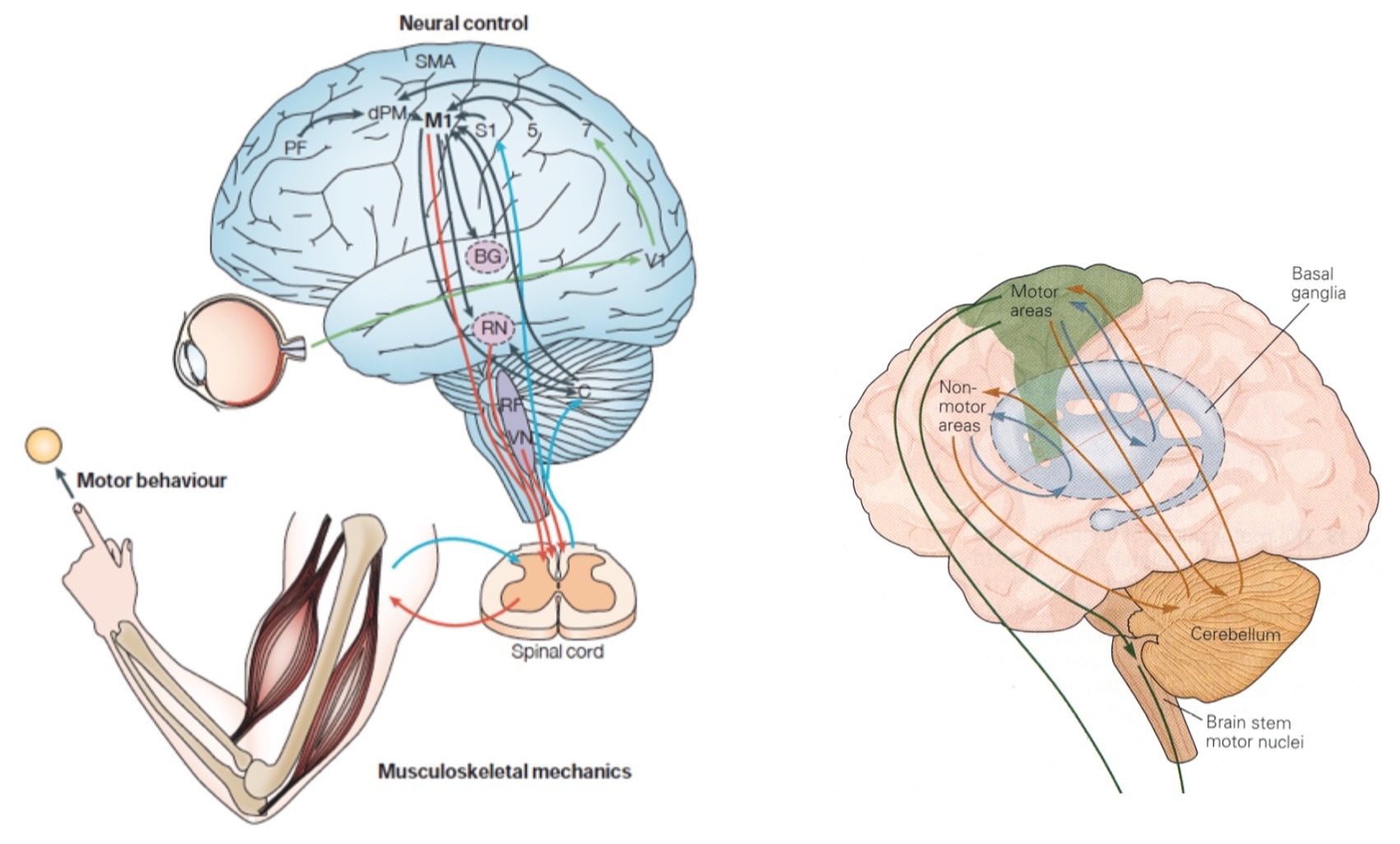 Anatomy: 4 important regions in the brain: