We assume that there are two types of flowers:

The flowers carry nectar rewards $r_1$ and $r_2$, and we assume that the bee’s internal estimates for the rewards are $m_1$ and $m_2$. The bee chooses the flowers according to a softmax-policy based on its internal reward estimates,

What does that say about the bee’s choice?

The larger the reward difference $d ≝ m_2 - m_1$, the better the bee estimates the yellow flower (number 2) compared to the blue (first) one. As a result, the lower the probability $p(c=1)$ of the bee landing on the blue one.

Analogously, the lower the reward difference, the worse the yellow flower (from the bee’s point of vue), and the greater the probability $p(c=1)$ of the bee landing on the blue flower.

And in between, the bee’s behavior is a mix between exploiting the most nutritious flower (according to the bee) and exploring the other one (which is what is expected).

d). Investigate the meaning of the parameter $β$. 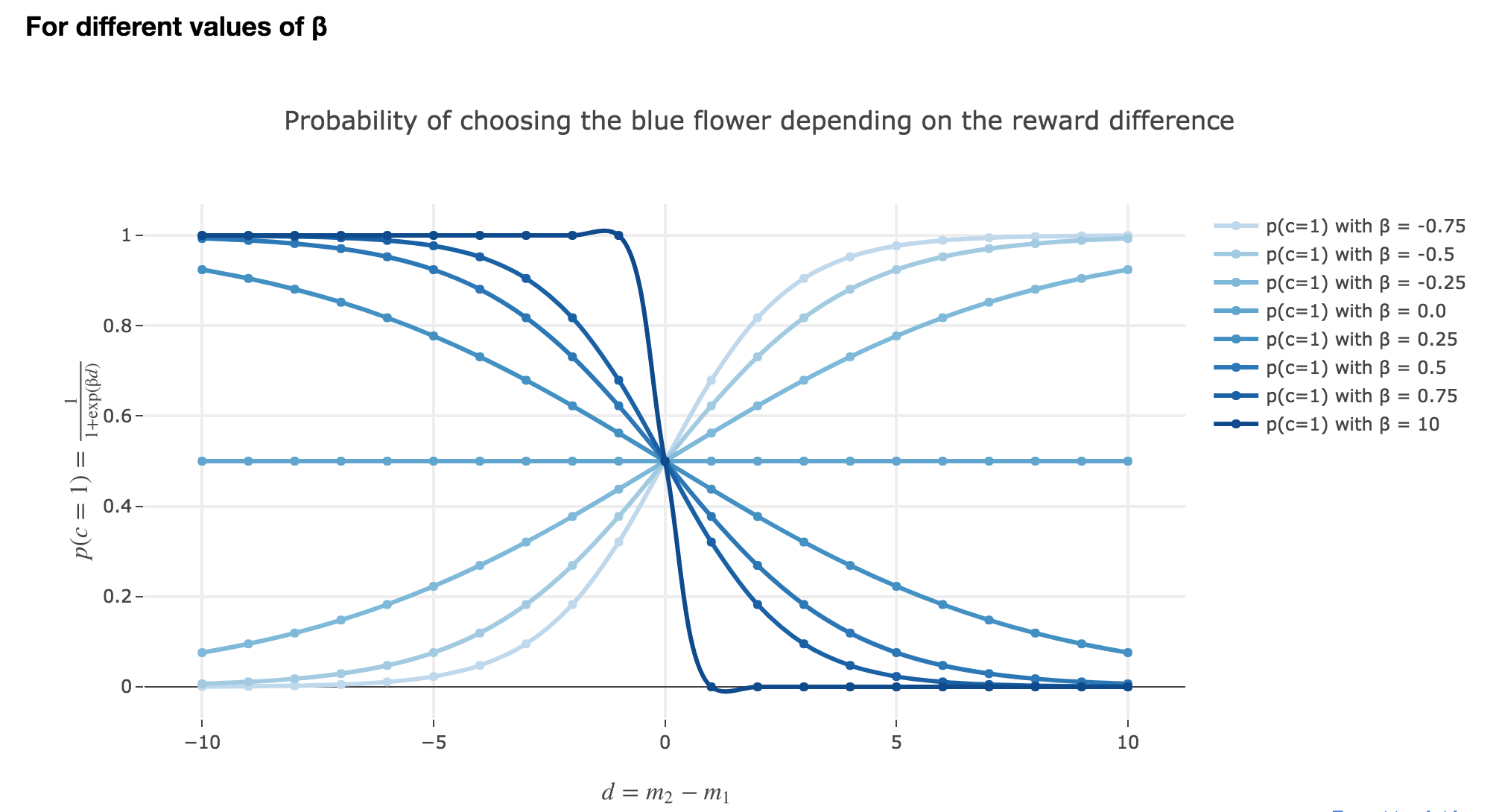 What happens if it becomes negative? Do negative $β$ make any sense?

The graphs for $-β < 0$ are symmetric to those for $β > 0$ with respect to the y-axis, which makes no sense from a behavioral point of vue: it means that: the most nutritious a flower appears to the bee, the less likely the bee is to land on it (and conversely)!

e). Imagine that there are $N$ flowers instead of just two. How can you extend the above action choice strategy to $N$ flowers?

To continue drawing a comparison with statistical physics: in physics, the probability that a system occupies a microstate $s$ is given by

Likewise, here, the natural generalization is given by:

where the normalization constant $\text{Const}$ is equal to

so that the probabilities add to $1$.

Therefore, overall, the action choice strategy can be extended to $N$ flowers as follows:

How can you trade off exploration and exploitation for the $N$-flower case ?

As before (which was a particular case with $N=2$), the exploration-exploitation tradeoff depends on the value of $β$:

f). Imagine that there are $N$ flowers, yet the rewards on these flowers, $r_c(t)$ change as a function of time. How should the bee adapt its internal estimates $m_c(t)$?

When the time is discrete: we have seen, in class, three ways for the bee to update its internal estimates:

If the time is now continuous:

By denoting by $T_c(t)$ the time that elapsed, at time $t$, since the last time (strictly before $t$) the bee visited the flower $c ∈ \lbrace 1, ⋯, N\rbrace$, the analogous continuous-time updates are:

e). Given the learning rules you developed in f), what will happen to the bee’s internal estimates $m_c(t)$, if the rewards stay constant for all $c$?

When it comes to the batch and greedy updates: if the rewards stay constant, so do the internal estimates, as soon as the bee lands on the corresponding flower.

The situation is trickier for the online update (so we will focus on this update from now on).

As we have seen in class:

How does that depends on the parameter $β$?

As the update of $m_c$ is done whenever the flower $c$ is visited by the bee:

What is the characteristic time constant of convergence for the learning rules, i.e. how fast do the estimates converge to their real values?

For the sake of convenience, let’s assume $T_c(t) = T_c$ is constant. We have

So for $t = τ$ the characteristic time constant, we have, as in physics:

Assuming that $T_c(t) = T_c$ is constant for the flower $c$, the characteristic time constant of convergence for the online update rule is equal to